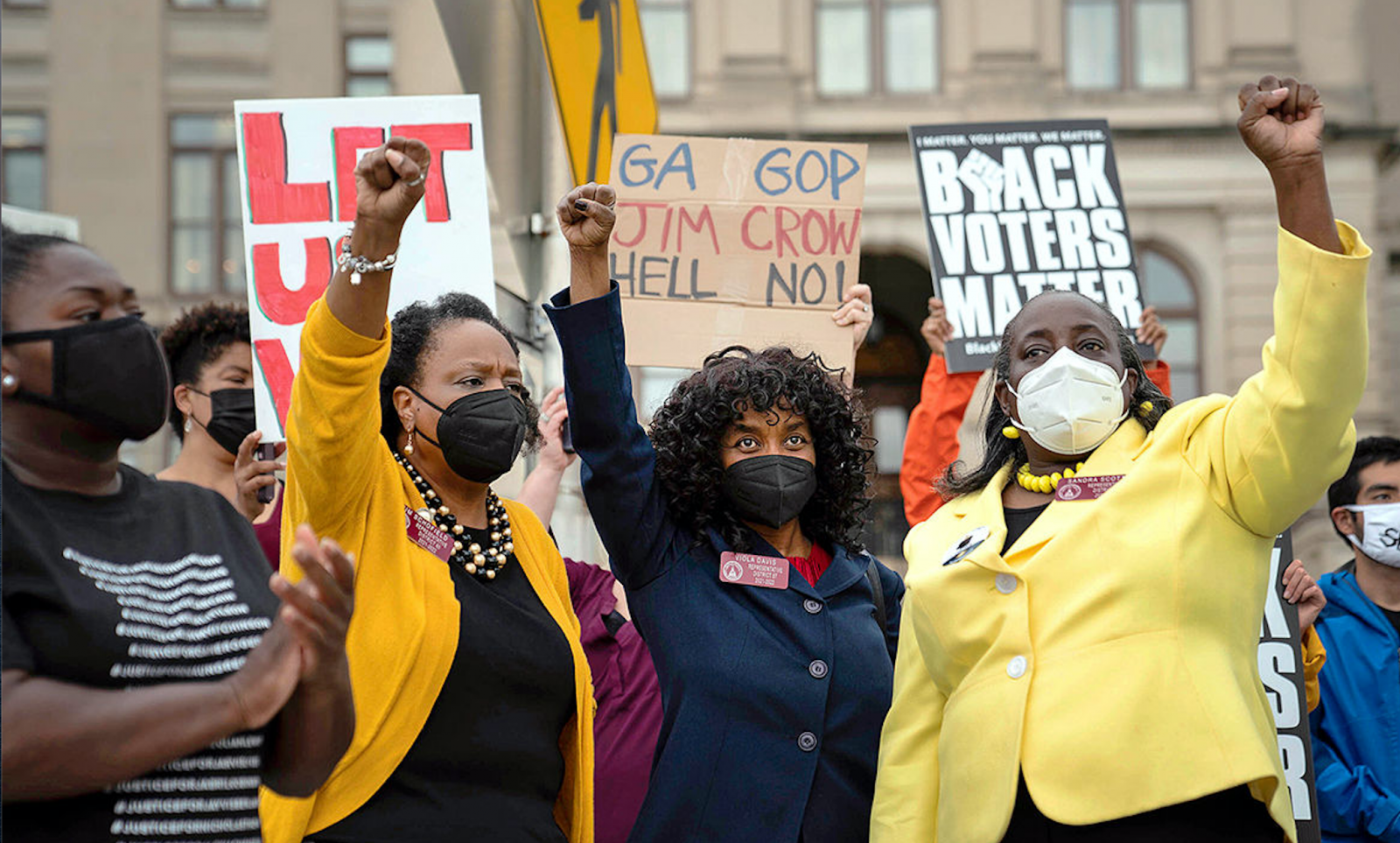 Attorney General Merrick Garland announced, on June 25, that the Department of Justice was suing the State of Georgia in federal court to overturn Georgia’s recently-passed voter restriction law.

The new Georgia law, which was passed by Republicans along partisan lines, creates new hurdles for voter registration and for absentee voting, while making it easier for voters to be removed from the rolls.

“The Georgia legislature enacted SB 202 with knowledge of the disproportionate effect that these provisions, both singly and together, would have on Black voters’ ability to participate in the political process on an equal basis with white voters,” said the 46-page lawsuit filed in the Northern U.S. District Court of Georgia.

The lawsuit was announced less than a week after Democrats in the United States Senate failed to overcome a GOP filibuster of the Democrats’ attempt to overhaul federal voting rights. The DOJ’s legal action is actually the eighth court challenge since the Georgia law was signed three months prior by Governor Brian Kemp on March 25, 2021.

Governor Brian Kemp and the Georgia GOP passed a wide-sweeping election law overhaul in March, 2021, in part to assuage anger from Trump supporters in the state that Kemp would need for reelection in 2022. Kemp was first elected governor in 2018 in a close race after using his former position as Secretary of State to purge hundreds of thousands of voters from the state rolls.

Two years later Kemp, who was consistently an outspoken supporter of President Donald Trump, found himself under fire from Trump supporters after Biden became the first Democrat since Bill Clinton to win the Peach State. The Trump supporters argued that Georgia’s 16 electoral votes were stolen through fraud of some sort. No proof was ever presented and multiple audits failed to uncover electoral shenanigans, but many supporters still felt that Kemp had betrayed the Republican Party by not overriding the vote in favor of Trump.

Private citizens are  not allowed to challenge the voter registration of any other voter, which is a method that Texas-based group True the Vote is using to challenge the legitimacy of over 364,000 Georgia voters through local surrogates, according to reports from investigative journalist Greg Palast.

The new Georgia law can trace its roots back to the 2013 5-4 decision from the U.S. Supreme Court in Shelby v. Holder, which stripped the 1965 Voting Rights Act of a requirement that states with a history of voter disenfranchisement could not enact new voting restrictions without prior consent from the federal government.

The DOJ’s lawsuit asks the court to invalidate every aspect of the new law that restricts voting or registration in any way, to authorize the appointment of federal observers and to restore the requirement that Georgia obtain federal pre-approval before making any additional changes to its election laws.

On the same day governor Kemp signed the bill into law, The New Georgia Project, Black Voters Matter Fund and Rise Inc. sued the state over the increased voter ID requirements, tighter restrictions on submitting applications for absentee ballots, shorter run off elections and the ability of a private citizen to challenge the voter status of anyone in the state.

A few days later, on March 29, the Georgia NAACP, Georgia Coalition for the People’s Agenda, League of Women Voters of Georgia, Galeo Latino Community Development Fund, Common Cause and the Lower Muskogee Creek Tribe all sued over the ID requirements, new absentee and provisional voting rules

Asian Americans Advancing Justice-Atlanta sued the state on April 1, over the new absentee and provisional ballot rules arguing that the expansion of absentee ballot options in 2020, due to COVID-19, helped double the turnout of Asian Americans and Pacific Islanders from 2016.

VoteAmerica, Voter Participation Center and Center for Voter Information filed suit on April 7, arguing that the new restrictions on absentee voting and voter registration places on unfair and costly burden on organizations, such as themselves, that work on increasing voter turnout.

A collections of churches sued on April 27 to void the law, which they argued unfairly targets get-out-the-vote methods that are traditionally used by Black voters and other voters of color in Georgia, such as providing food and water to voters waiting in line, coordinating rides to polling places and distributing applications for voter registration and absentee ballots.

The Coalition for Good Governance, Jackson County Democratic Committee, and the Georgia Advancing Progress Political Action Committee sued to oppose the absentee and provisional voting changes, and also sued to halt the legislature from being able to replace local election boards with their own partisan board members.

That requirement to establish standing or actual damages is likely to make success difficult for the majority of the lawsuits, though the Department of Justice brings more resources for litigation that can make it easier to use the lawsuit to pressure the Georgia GOP into making some conciliatory concessions on enforcement of the voting law.

Democracy Docket is currently maintaining a list of current lawsuits in Georgia over voting rights, along with recent court filings.

Atlanta Journal Constitution: DOJ is the latest to sue over Georgia’s voting law; here are the others