One Hundred Years After the Destruction of Black Wall Street, the Community Still Suffers Economic Violence 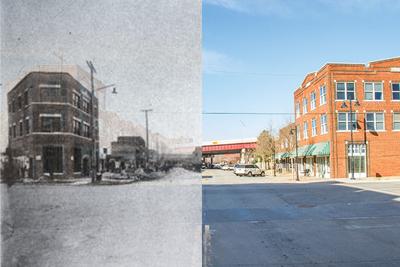 One Hundred Years After the Destruction of Black Wall Street, the Community Still Suffers Economic Violence

On this Memorial Day it is time to remember the post-Civil War achievements of Black communities and the violence suffered to halt their progress.  One hundred years ago today, the thriving Tulsa community known as Greenwood was incinerated by two days of riots, replete with arson firebombs, and dynamite dropped from airplanes above.  The entire Black community was ravaged, leaving 300 dead, thousand homeless, and businesses permanently lost.  Thirty five city blocks were razed in the riot and the ultimate cost to the community can never accurately be assessed.

The history was literally wiped out as police reports, news articles, and any other remnants of its existence disappeared.  Many were unaware of the existence of the community until the 2019 Watchman HBO series dramatized it, re-introducing it to public consciousness.  As a consequence, the Oklahoma school curriculum now covers the massacre. Other thriving Black communities developed in the early twentieth century including Durham, NC, Richmond VA, and Rosewood Florida; the latter  also met with destruction.

The cause of the Tulsa massacre is debated; some attribute it to a young white woman’s assault by a Black teenager. However, the woman in question denied the assault and refused to be a foible for racist police actions, stating that she did not wish to be “used” in that way.  Underlying reasons are likely more systemic; Black affluence threatened the white “ownership” of success or perhaps there were plans to run the railroad through the areas and the Black community just happened to be the desired corridor. Tulsa had a strong anti-Black, anti-Native American, Anti-Communist culture and shortly before the massacre a Jewish man was lynched and burned there.

In communities like Greenwood, prosperity was not only stopped but regressed, possibly never to be recovered.  Other historical acts have been perpetrated against citizens ranging from Native American “relocation” to the internment of Japanese during WWII.  But persistent white economic hegemony has been prevalent and embedded into the country’s economic systems.  It has been demonstrated that African Americans, and other people of color as well as immigrants, have been subjected to discrimination in student loans, real estate, farm loans, housing practices, pay scales, unionization and other related practices.  A study just released showed that African American individuals were four times more likely to be evicted than their white counterparts by corporate landlords, even when holding constant the social class of the tenants and their communities. The time for discussion regarding these practices seems passed while the moment to institute reparations appears upon us.

Documentaries of the 1921 Tulsa Massacre